In my part-time work as a photographer, I have come to be acutely aware of copyright, trademark, and intellectual property issues. I've seen my own work used for commercial purposes without permission, reimbursement, or attribution. I've seen outright theft of photographs; people swiped photographers' works, removed their watermarks, and took credit for the photos.

But lately I've seen something I hadn't noticed before. Theft of the written word. This is called plagiarism and, apparently, an awful lot of people don't think it's wrong. From what I've seen, they certainly don't think of it as stealing. But it is.

The written word is as important to the person who did the writing as any product is to anyone. The time, effort, and often, money that go into writing a book, for instance, all make the finished product valuable. It counts as property. Just as if it were a car, building, or sculpture that was made by hand, the written word is the property of the creator. Copying it without that person's knowledge is theft.

What prompted this was the incredible amount of work which I saw stolen from a photographer recently. This was not some minor bit of "borrowing" some ideas. Nor was it, as some like to say, "imitation is the sincerest form of flattery". A fauxtographer took what is essentially an entire kit of workshops, written into ebooks, from a real photographer. One who had worked for eight years and who had spent over $5000 creating a masterful workshop. The fauxtog copied almost every part of the $99 kit, word for word, and began to present it as her own work, charging customers for the same information!

The most egregious part is that she stole not just from the one photographer, but from at least a half dozen other photographers! One of her comments on her Facebook photo page is that she feels that photographers often do things "the hard way". I can only assume she means they take the time to create original works, rather than simply stealing work from others.

What is amazing to me is that most of the time, people who commit this type of theft don't think they've done anything wrong. They don't put it in the same category as stealing a car, or burglarizing a home, or even shoplifting. Because they don't literally take a physical object from another person, they feel that they haven't stolen. That is just sad.

And they then think, as in the case here, that the work they have stolen is now their own intellectual property. I am happy to inform them and anyone who will read this that being a "Google Intellectual"* is not actually being an intellectual, nor does it make you smart, original, or valuable.

It makes you pitiful, in every way possible.

* I looked on line for this phrase to make sure I wasn't stealing it from someone else first!
Posted by The Defiant Marshmallow at 10:29 AM 1 comment:

In order to keep this sad, sad blog going, I know I have to post once every so often, even during its hibernation. The two people still reading this please, for god's sake, comment!

So, in the spirit of winter, here's a little photo I snapped with my iPhone 5. Yep, my iPhone.

I bought a $39 slip-on macro lens for it, figuring I had nothing but $40 to lose and everything to gain if it worked. And it works! Enjoy the snowflake, taken at 28mm (that's the iPhone's focal length) and a 21x macro lens, which does something to the focal length, but I'm too lazy to determine just what.

Technique for getting the photo:

- take glass plate onto back deck while snow is falling.

- EXTRA TIP! Let the plate get nice and cold before setting it horizontally. That will keep the snowflakes from melting immediately upon landing.

- lay plate on deck railing, so that part of it is hanging off.

- VERY quickly, place iPhone with macro over the snowflake and snap away. - repeat about 500 times until you get one good photo! 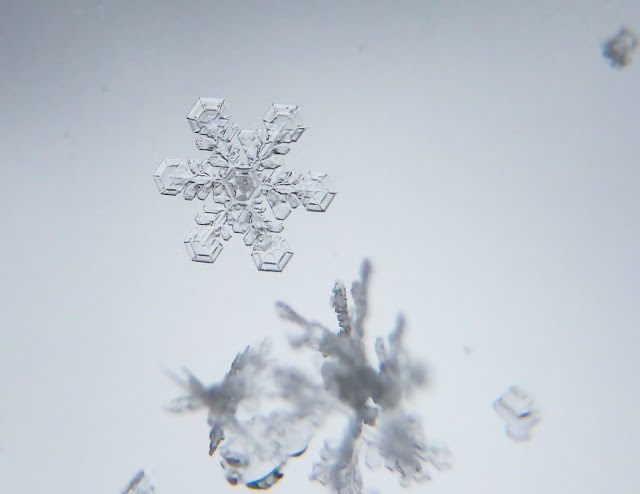 Posted by The Defiant Marshmallow at 1:17 PM 2 comments: